There’s a whisper in the trees. A quiet song that comes and goes as faithfully as the wind and emanates from the needles of the pines. It’s the hum of Mother Nature that soothes anyone who listens that she is there and in control. If you choose to listen, you can hear how big and great the world is. You can hear the time go by yourself. In these moments, you may find some peace in your insignificance.

I didn’t realize it until I was an adult and had already moved away from the Pacific Northwest. The challenges of putting so much activity into my summers and running from sport to sport, from tape exercise to drama and friend to friend kept me so distracted and unaware that I completely missed it, even when I was in one of the greatest expanses of the evergreen lived and mountain. I didn’t necessarily take nature for granted, I simply invested the currency of time badly. My priorities were for the future, so I paid little attention to the present. Everything in my youth was incessant and moving rapidly forward. An athletic scholarship was my only chance to afford college, and I was fully involved.

Now, with graduation in my pocket and four kids on foot, time still seems to be passing as fast as it did before. However, I can almost feel the weight flowing over me like the wave of a fast moving stream. It bubbles and roars as I drive past and my children’s faces are getting older. I can see it now and it’s not painless. It hurts a little more every day knowing that this is finally here.

I have now learned that it is imperative for me to invest my time wisely. Not just for myself, but mostly because of its value to my boys. I want to show them that not everything has to be done in the fast lane and that not every occasion has to be stifled. We can actually take the time to enjoy nature’s song and stand still while the wind scratches the needles of the pine trees. 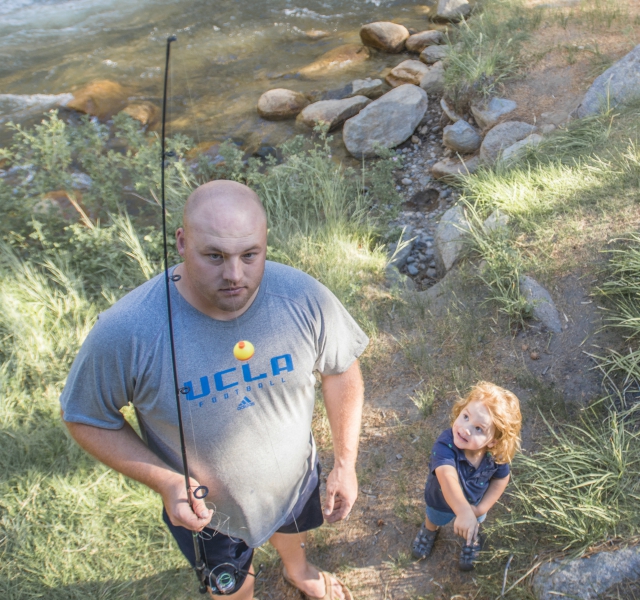 A few years ago I discovered my passion for trout fishing. Not to say that I had no idea it existed before, just that it was never really something I looked forward to or participated in. During a camping trip to northeast California. We found ourselves next to a babbling brook that meandered through the forest – a little corner of the mountain range we call the Sierras. After waking up one morning to the ringing of copper bells hanging around the shoulders of a flock of a thousand things, I became addicted. A marker was placed in my head and in these mounds, obliging me to return in a personal contract.

Even with as little experience as I did (mostly YouTube and vague memories as a kid), we caught fish in this creek with ease. I also learned that I enjoyed pulling my dinner out of the water, cleaning it, and cooking it myself. Another important lesson? Getting rid of scraps of fish in a place like the Sierras is important, or a bear a little less friendly than Winnie the Pooh might stop by in search of something more essential than honey.

And so, after a year of little adventures, we got ready for the pines again. As I packed the camp equipment into the trailer, I was looking forward to the cool, thinner air at this altitude. The soil from a forest floor in the Sierra Mountains has its own unique smell, the result of years of decomposition of tree bark. I had spent many hours preparing and modifying my truck and trailer for these trips. We even put a roof tent on the truck to show our commitment to nature. I also built a fishing rod holder into the tent shell to ensure an impromptu cast can be made.

We drove up Highway 395 and found our way back to the old creek, much like many other fish returning to their beloved waters. We brought our rooftop tent and drove down the dusty road to our camp site in the free open camping areas near Buckeye. We were pleasantly surprised to find a spot right on the water. We set up camp with a blanket of lush green grass and a canopy of fir branches. This year had been extremely wet, and the melting snow in the mountains raised the water level and the noise level of the creek. Cold mountain water streamed down the backs of once-dry boulders as swirling ponds teased the banks.

After tidying up the camp, I went to test the water on the nearby bridge. The cool air kept me company as I tried a new power bait for my slippery prey. A truck of college-age men pulled up and parked down the street. They got out and immediately went to the edge near me. I guess I looked like a wise old fisherman or something. Things got relatively crowded and I decided the trout might be feeling a bit annoyed so I returned to the boys at our campsite. To practice my patience and our enjoyment of nature, we played with our toy tractors and swim shorts on the water.

I tried the creek again early in the morning, but it seemed like the fish had moved on. I spent a few hours persuading a small group of trout to try my bait. Must have had a big breakfast or something. Finally, when the sun was high in the sky, we decided to go to greener pastures.

Our next stop was Twin Lakes outside Bridgeport, where Chelsea tried their hand at casting. It was fun to watch and she did her best for a while. Ultimately, however, we decided to go further south.

Chelsea, almost as frustrated as me, did mobile research to find promising lakes and streams to throw a snake into. It turned out that there had been a major fishing competition the week before which explained the apparent shortage of trout. I stopped at Virginia Lakes – where I had seen a few people ice fishing a month ago – but left when I met half a dozen disappointed faces on troubled trout on the bank. Chelsea referred us to a small chain made up of Lakes Grant, Silver, Gull and June. Once again we were teased by a school of fish that was apparently on a hunger strike.

Finally, as the sun neared its resting place, Chelsea and I found ourselves near the last fishing hole in the sierras, Crowley Lake. The daylight indicated his departure, and I desperately tossed my line into the deepest part. The boys, wondering when something might finally bite, chatted by building a small construction site near the truck. But it was Chelsea who brought the only trout on the trip. She danced and sang and called the boys over to celebrate their acquisition.

It’s weekends like this that strengthen our families. When we slow down and take time to enjoy what is available around us, we pass so much on to our children. You may not have fished much yourself this time, but you have learned from experience. On this journey they learned perseverance. When we were putting the boys to bed that night, Sidekick asked, “When can we go back to the river place?” So I knew that – even though we only got one fish from a last minute stop at the lake – we had brought more than enough home. We didn’t just catch fish. We caught memories.

Use our interactive map to find more places to fish, go boating, and spend a day in the water with your family.

Nature center that accepts entries for the photo competition

Best Beginner Fly Rods: What To Look For

River Conservation: Who is Protecting the Watershed of the Western River?