My children and their families live far away from my home. The grandchildren are young and when they visit I take them fishing. Right now it’s easy to use baits and floats for bass and panfish. Recently, my daughter Megan and her 5 year old son Gabe and almost 3 year old daughter Rory visited her and I took her pond fishing two mornings in a row.

Gabe has caught fish with me before, usually just the two of us. He is eager and loves it. But this time his sister, who wants to do whatever he does, came to us for her first fishing experience and there was a new dynamic that involved sharing.

Megan came and was in charge of the most important thing kids should have when they go fishing: the food and drinks they like. It is almost certain that children will get hungry or thirsty a few minutes after an excursion, so you cannot minimize this. Drinks are of course especially important in hot weather.

That was important for our trip as we were experiencing a heat wave. We had no choice but to start in the morning on the first day for various reasons. This is not my preference in summer and hot weather, but Gabe was so eager that we decided to go anyway and storms were predicted for later days. A lot of action generally overcomes discomfort, but fishing early at this point is often better for getting action and for being personally comfortable. Since children have to wear PFDs in a boat, it can add to their discomfort in hot weather. However, if they are used to wearing PFDs from previous boating experience, they are less likely to do so.

The question often arises when children can start fishing. Of course, that depends on the child. Gabe hasn’t learned a casting yet, but he could at 5 if we had enough practice time. He can roll in small fish on his own as long as the device is correctly adjusted. At 3 years old and a beginner, Rory can hardly hold an easy rod and cannot be trusted to hold onto a rod that is being pulled by a fish. So she needs help. Of course, children want to do things on their own and should do so as soon as they are able to do so. But they can watch a swimmer (bobber) and get excited when it dips in or disappears. So we fished Minnows on small circle hooks for bass and worms on long-legged J-hooks for Sunfish. I put the baits in position, they paid attention to activity (when they weren’t eating, drinking, or playing with the minnows and worms). 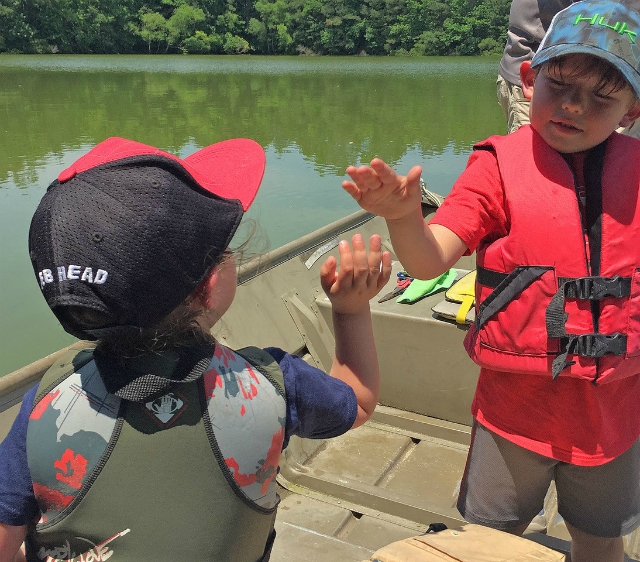 We had an earlier start on the second day, but the heat and humidity were such that we took shelter in the shade whenever we could. That was better for the fish too, because that’s where we caught most of the bass, bluegills, and clam crackers. We didn’t catch much either – about six fish over two hours each trip – but Rory made her first bass, bluegill, and clam cracker and was always pretty aware of who was next to land the next fish.

If it had been cooler and the action was fast we might have stayed longer, but if you want kids to enjoy fishing it is self-destructive to push them. Stop fishing when you want to stop when you’re too hot (or cold or wet) or bored.

Here are two more pieces of advice for fishing with children. First, encourage, but don’t insist that they handle or touch the fish. You will when and when you want. Even though Rory was a beginner, she was more interested in touching and holding than in her brother. Let them release their fish if they want.

Second, most children want to keep what they catch first, or at least the larger specimens. My rule is that we don’t keep what we won’t eat. You have to be ready to eat it if you want to keep it. Many teenagers don’t eat fish, so they hesitate when explaining this rule. My niece hated eating fish when she was young but wanted to keep her catch. She agreed to eat it and surprisingly found that she liked it, much to the chagrin of her mother (although she would only eat the fish she caught and which I cooked). Sometimes I let kids keep a fish in the livewell for a while so they can admire it a little longer without it falling to the bottom or being mistreated. Then we let go of it. This is not feasible in hot weather.

After fishing, we celebrated Gabe and Rory’s catch by going to an ice cream parlor. Some might call this a payoff or a bribe, but I call it positive reinforcement, another important element of getting kids going fishing.

How to Tie an Albright Knot: Braid on Fluorocarbon